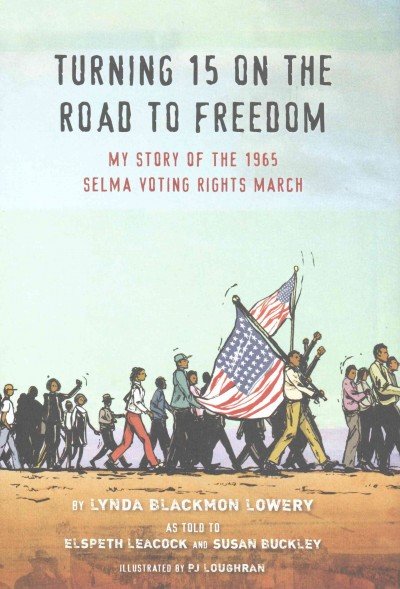 A 50th-anniversary tribute shares the story of the youngest person to complete the momentous march from Selma, Ala., to Montgomery, describing her frequent imprisonments for her participation in nonviolent demonstrations

A 50th-anniversary tribute shares the story of the youngest person to complete the momentous Selma to Montgomery March describing her frequent imprisonments for her participation in nonviolent demonstrations and how she felt about her involvement in historic Civil Rights events. (publisher)

Review Quotes:
* “Vivid details and the immediacy of Lowery’s voice make this a valuable primary document as well as a pleasure to read.”–“Kirkus ” starred review
* “One of those rare books that is geniunely accessible to a brad audience.”–“BCCB ” starred review
* “This inspiring personal story illuminates pivotal events in America’s history.”–“Booklist ” starred review

Biographical Note:
Lynda Blackmon Lowery the youngest person to take part in the whole Selma to Montgomery March now works as a case manager at a mental health center and still lives in Selma Alabama.
Elspeth Leacock and Susan Buckley have collaborated on several previous history and geography books for young people. Elspeth lives in Brooklyn New York and Susan lives in New York City.
P J Loughran is an illustrator creative director and musician. He lives in Chicago Illinois.

Publisher Marketing:
A memoir of the Civil Rights Movement from one of its youngest heroes
As the youngest marcher in the 1965 voting rights march from Selma to Montgomery Albama Lynda Blackmon Lowery proved that young adults can be heroes. Jailed eleven times before her fifteenth birthday Lowery fought alongside Martin Luther King Jr. for the rights of African-Americans. In this memoir she shows today’s young readers what it means to fight nonviolently (even when the police are using violence as in the Bloody Sunday protest) and how it felt to be part of changing American history.
Straightforward and inspiring this beautifully illustrated memoir brings readers into the middle of the Civil Rights Movement complementing Common Core classroom learning and bringing history alive for young readers. 128 pages
12 to 17 years

Be the first to review “Turning 15 On The Road to Freedom: My Story of the Selma Voting Rights March” Cancel reply