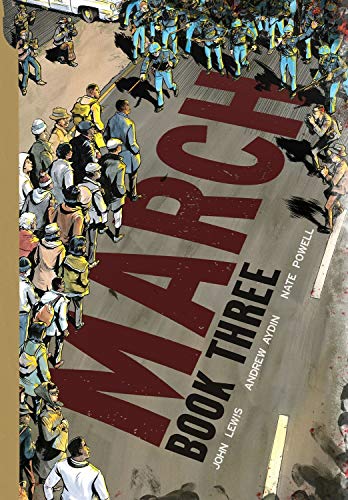 I’m stunned by the power of these comics and grateful that Congressman Lewis’s story will enlighten and inspire future generations of readers and leaders. – Raina Telgemeier

Review Quotes:
BOOKLIST (STARRED) — A stirring call to action that’s particularly timely in this election year and one that will resonate and empower young readers in particular. Essential reading.

Review Quotes:
KIRKUS (STARRED) — A living icon of the civil rights movement brings his frank and stirring account of the movement’s most tumultuous years (so far) to a climax. As chairman of the Student Non-Violent Coordinating Committee between 1963 and 1966 Lewis was directly involved in both public demonstrations and behind-the-scenes meetings with government officials and African-American leaders. He recalls both with unflinching honesty in this trilogy closer carrying his account from the bombing of the 16th Street Baptist Church to his eventual break with SNCC’s increasingly radical elements.
Alternating stomach-turning incidents of violence (mostly police violence)-including his own vicious clubbing on the Selma to Montgomery march’s “Bloody Sunday”-with passages of impassioned rhetoric from many voices he chronicles the growing fissures within the movement. Still despite the wrenching realization that “we were in the middle of a war ” he steadfastly holds to nonviolent principles. The passage of the 1965 Voting Rights Act marks the end of his account though he closes with a final look ahead to the night of Barack Obama’s 2009 inauguration. Powell’s high-contrast black-and-white images underscore the narrative’s emotional intensity with a parade of hate-filled white faces and fearful but resolute black ones facing off across a division that may not be as wide as it was then but is still as deep.
This memoir’s unique eyewitness view of epochal events makes it essential reading for an understanding of those times-and these. (Graphic memoir. 11 & up)

SCHOOL LIBRARY JOURNAL (STARRED) – Gr 8 Up-In the final installment in the trilogy Congressman Lewis concludes his firsthand account of the civil rights era. Simultaneously epic and intimate this dynamic work spotlights pivotal moments (the bombing of the 16th Street Baptist Church in Birmingham AL; the Freedom Summer murders; the 1964 Democratic National Convention; and the Selma to Montgomery marches) through the lens of one who was there from the beginning. Lewis’s willingness to speak from the heart about moments of doubt and anguish imbues the book with emotional depth. Complex material is tackled but never oversimplified-many pages are positively crammed with text-and as in previous volumes discussion of tensions among the various factions of the movement adds nuance and should spark conversation among readers. Through images of steely-eyed police motion lines and the use of stark black backgrounds for particularly painful moments Powell underscores Lewis’s statement that he and his cohorts “were in the middle of a war.” These vivid black-and-white visuals soar conveying expressions of hope scorn and devastation and making storied figures such as Martin Luther King Jr. Malcolm X and Fannie Lou Hamer feel three-dimensional and familiar. VERDICT This essential addition to graphic novel shelves history curricula and memoir collections will resonate with teens and adults alike.-Mahnaz Dar School Library Journal” – publisher

Be the first to review “March – Book Three” Cancel reply