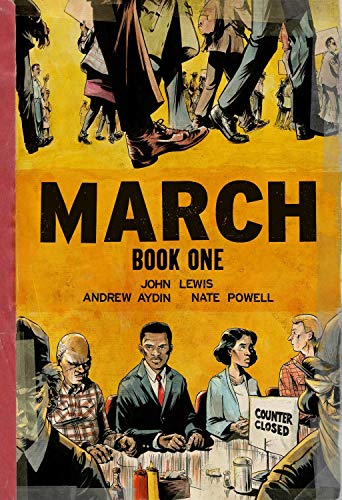 U.S. Representative John Lewis recalls his early years-from raising (and preaching to) chickens on an Alabama farm to meeting Martin Luther King Jr. and joining lunch-counter sit-ins in Nashville in 1960.

‘March’ is a vivid first-hand account of John Lewis’ lifelong struggle for civil and human rights (including his key roles in the historic 1963 March on Washington and the 1965 Selma-Montgomery March) meditating in the modern age on the distance travelled since the days of Jim Crow and segregation.

Review Quotes:
Eisner winner Powell’s dramatic black-and-white graphic art ratchets up the intensity in this autobiographical opener by a major figure in the civil rights movement.
In this first of a projected trilogy Lewis one of the original Freedom Riders and currently in his 13th term as a U.S. Representative recalls his early years-from raising (and preaching to) chickens on an Alabama farm to meeting Martin Luther King Jr. and joining lunch-counter sit-ins in Nashville in 1960. The account flashes back and forth between a conversation with two young visitors in Lewis’ congressional office just prior to Barack Obama’s 2009 inauguration and events five or more decades ago. His education in nonviolence forms the central theme and both in his frank self-effacing accounts of rising tides of protest being met with increasingly violent responses and in Powell’s dark cinematically angled and sequenced panels the heroism of those who sat and marched and bore the abuse comes through with vivid inspiring clarity.

The volume closes with the founding of the Student Nonviolent Coordinating Committee (which Lewis went on to chair) and its publication is scheduled to commemorate the 50th anniversary of the March on Washington at which Lewis preceded Dr. King on the podium: “Of everyone who spoke at the march I’m the only one who’s still around.” A powerful tale of courage and principle igniting sweeping social change told by a strong-minded uniquely qualified eyewitness. (Graphic memoir. 11-15) ” – Publisher
paperback 121 pages
Ages 13-16

Be the first to review “March – Book One” Cancel reply