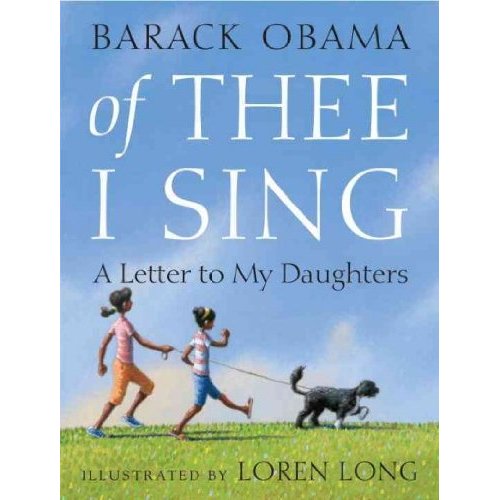 Of Thee I Sing: A Letter to My Daughters by Barack Obama

“Of Thee I Sing: A Letter to My Daughters” is a tribute to 13 groundbreaking Americans from the first president George Washington to baseball great Jackie Robinson to artist Georgia O’Keeffe.
The president will donate any author proceeds to “a scholarship fund for the children of fallen and disabled soldiers serving our nation ” the publisher said in a statement.

“Written by Obama before he took office in January 2009 the book celebrates an America “made up of people of every kind ” each bringing their different gifts to the mix.

“Breathtaking evocative illustrations by award-winning artist Loren Long at once capture the personalities and achievements of these great Americans and the innocence and promise of childhood.

This beautiful book celebrates the characteristics that unite all Americans from our nation’s founders to generations to come. It is about the potential within each of us to pursue our dreams and forge our own paths. It is a treasure to cherish with your family forever.”(publisher)

“An addendum features a bit more about each person highlighted. Parents will be happy to talk to their own children about how creative or kind or strong they are and reiterate as the president does their place in the American family. — Ilene Cooper”—Booklist starred review
Reading level: 6.0
Ages: 4-8 Ages 5 and up 40 pps.

Be the first to review “Of Thee I Sing: A Letter to My Daughters by Barack Obama” Cancel reply