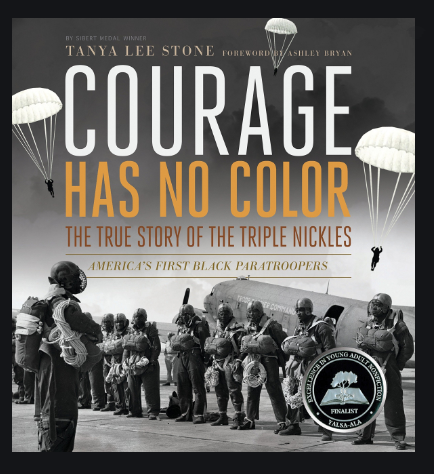 Tanya Lee Stone examines the role of African Americans in the military through the lens of the untold story of the Triple Nickles as they became America’s first black paratroopers and fought a little-known World War II attack on the American West by the Japanese.

A 2014 YALSA Excellence in Nonfiction Finalist They became America s first black paratroopers. Why was their story never told? Sibert Medalist Tanya Lee Stone reveals the history of the Triple Nickles during World War II. World War II is raging and thousands of American soldiers are fighting overseas against the injustices brought on by Hitler. Back on the home front the injustice of discrimination against African Americans plays out as much on Main Street as in the military. Enlisted black men are segregated from white soldiers and regularly relegated to service duties. At Fort Benning Georgia First Sergeant Walter Morris s men serve as guards at The Parachute School while the white soldiers prepare to be paratroopers. Morris knows that for his men to be treated like soldiers they have to train and act like them but would the military elite and politicians recognize the potential of these men as well as their passion for serving their country? Tanya Lee Stone examines the role of African Americans in the military through the history of the Triple Nickles America s first black paratroopers who fought in a little-known attack on the American West by the Japanese. The 555th Parachute Infantry Battalion in the words of Morris “proved that the color of a man had nothing to do with his ability.”

From “Courage Has No Color”
What did it take to be a paratrooper in World War II? Specialized training extreme physical fitness courage and until the 555th Parachute Infantry Battalion (the Triple Nickles) was formed white skin.
It is 1943. Americans are overseas fighting World War II to help keep the world safe from Adolf Hitler s tyranny safe from injustice safe from discrimination. Yet right here at home people with white skin have rights that people with black skin do not.
What is courage? What is strength? Perhaps it is being ready to fight for your nation even when your nation isn t ready to fight for you.”
Hardcover
147 pages
Ages 10-13

Be the first to review “Courage Has No Color – The True Story of the Triple Nickles: America’s First Black Paratroopers” Cancel reply