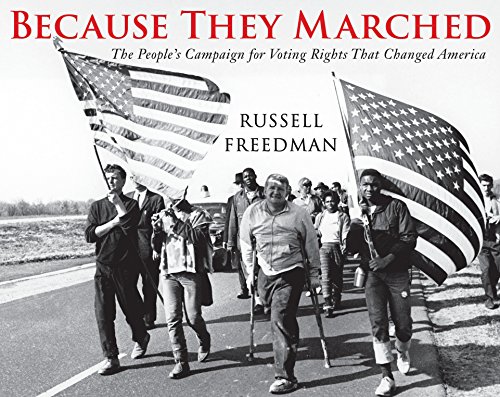 To commemorate the 50th anniversary of the 1965 march for voting rights from Selma to Montgomery Alabama Newbery Medalist Freedman presents a riveting account of this pivotal event in the history of civil rights. Illustrated with more than 40 photographs this is an essential chronicle of events every American should know.”(publisher)
Hardcover
83 pages
Ages 13-17
Ages 13-17

In the early 1960s, tired of reprisals for attempting to register to vote, Selma’s black community began to protest. The struggle received nationwide attention when Dr. Martin Luther King, Jr. led a voting rights march in January, 1965, and was attacked by a segregationist. In February, the shooting of an unarmed demonstrator by an Alabama state trooper inspired a march from Selma to the state capital of Montgomery. The march got off to a horrific start on March 7 as law officers attacked peaceful demonstrators. Broadcast throughout the world, the violence attracted widespread outrage and spurred demonstrators to complete the march at any cost. On March 25, after several setbacks, protesters completed the fifty-four-mile march to a cheering crowd of 25,000 supporters.

Be the first to review “Because They Marched: The People;s Campaign for Voting Rights That Changed America” Cancel reply